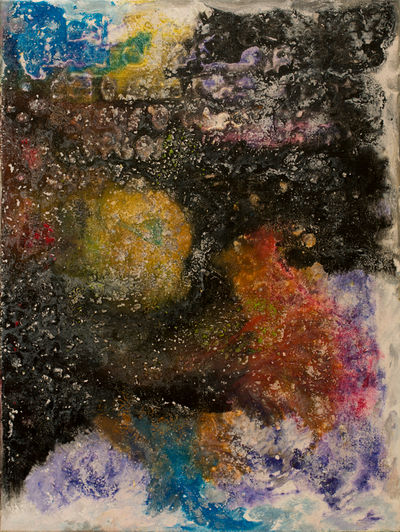 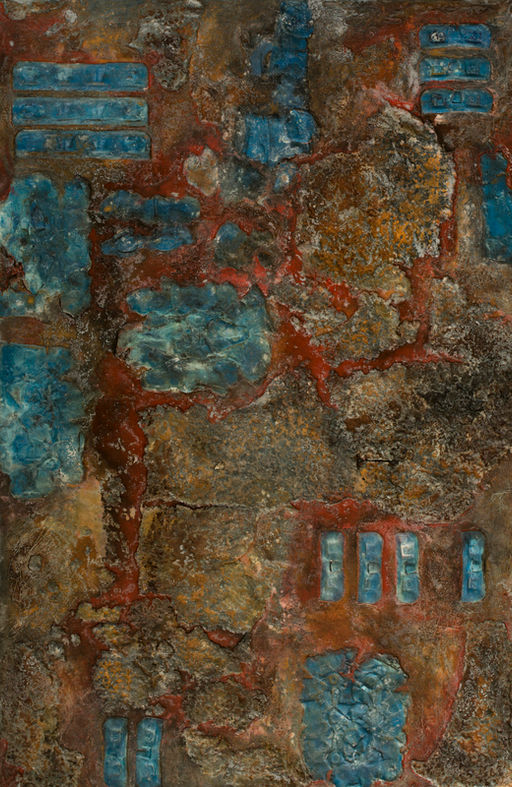 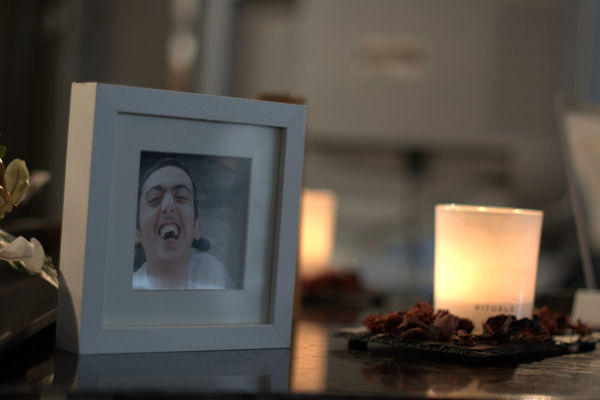 Signs as old as the beginning 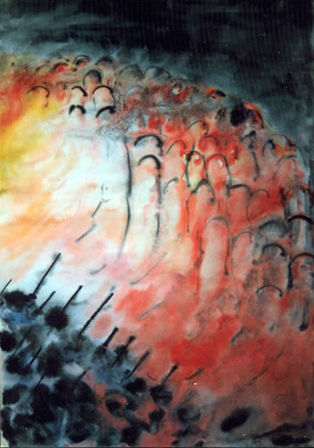 Since the worldwide immigration waves of the 1980s, numerous Chinese, Asian and Middle Eastern artists seeking freedom and proper conditions have moved to ‘the West’. This event has caused cultural exchanges and its effects on western culture are so obvious that they cannot be ignored. Sometimes these artists’ successes achieve such depth that they challenge the assumptions of western art and artists to see things differently.

The world does not belong only to the West anymore. The East has many things to offer in the field of art and artists from that region have increasingly set the pace/criteria for contemporary art. Behrouz Naghipour is one of these artists; he left his country in 1990 and has lived in the Netherlands ever since. Living in an open society has given him this opportunity to devote himself to art and has helped him discover many possibilities in painting, photography and music; art has become an indispensable part of his life.

If we study his work chronologically, we realize that it starts with figurative painting, but forms in these works become so abstract that sometimes the difference between such forms and abstraction is barely discernable. This set of Behrouz’s works is done in etching form or paintings on canvas.

We face an intellectual artist who becomes involved with philosophy through painting. We might be able to interpret this set of works by their autobiographical attributes. Man fights with his inner world while dealing with general concepts of psychology and philosophy and its reflection back upon him and on the artwork itself. Behrouz himself says that his works are, “portraying the human’s inner secrets and concepts such as life, death, love, hate, faith, sorrow, joy, weakness, strength”. In these paintings we see ordinary human figures or elements from nature that have been de-familiarized by their placement within an unrealistic context. This is surrealism that changes the common habits of vision and shakes ordinary thought. The themes of these works are mostly what could be characterized as graphic exposés of human inner conflicts and the artist’s thoughts and philosophical challenges.

The next generation of his work began in 2000 and shows more abstraction. Behrouz says about this body of work: “I draw myself into the impact of the role of color, line, texture, composition, structure, contrast, balance and…. on a white surface of the canvas, since each element of it has so many untold stories”. One of the features of Behrouz’s work in this period is the formal use of calligraphic language and the questioning the substance of religious, cultural and historical beliefs. These traits have much in common with characteristics of artists who lived in Eastern Europe in the 1980s and set their work apart from their contemporaries, somehow giving individuality to the contemporary modern painting styles. Behrouz Naqhipour creates a unique visual world by, on the one hand, utilizing Islamic pictorial conventions and graphics, Persian calligraphy, the typical colors used in Islamic art such as green turquoise and azure blue, and challenging the West’s visual language on the other. He not only uses the elements of his homeland artistic traditions in his work but also considers those of western painting. By using Persian calligraphy to create a new connection in these series of works, he still keeps a distance from his native culture but does not allow himself to be suppressed by the influence of western forms and culture either. He uses indigenous Islamic and Persian symbols and Ornaments, but that does not entail that he reproduces elements of Persian culture in his artwork in their exact form. Instead, he analyzes these elements and comes to new connections and graphical signs that change the former meaning of them. 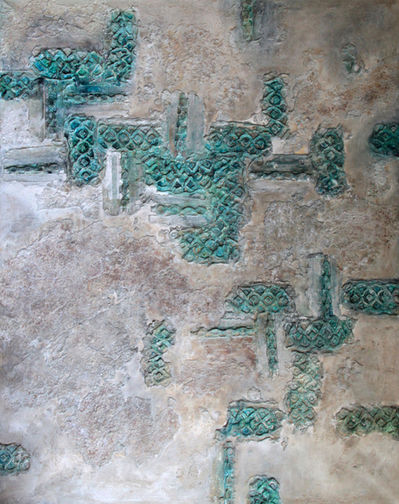 With his approach, Behrouz achieves a visual language interface that can be understood by today’s generation and is highly relevant to contemporary art worldwide. He removes the philosophical, religious and cultural elements from their usual context and expresses them in a completely free form, playing with and trying out colors and materials. This de-familiarizing goes so far as to change the definition of typical Islamic color or traditional pictorial Or philosophical values of the East and involves us in new contemporary social-philosophical issues.

It can be said that Behrouz’s abstract artworks, in addition to their eye-catching features, present a world of questions before us that is amazingly complex but accessible at the same time. Time in Behrouz’s artworks is unstable and ephemeral, and this concept is not just about time in a chronological sense, but in a chaotic/ immeasurable /urgent sense. Everything is happening right now. Such abstract notions are central to his abstract painting. According to the artist, “the content of my work derives from my personal impressions of the world around me: Past, present and future worlds; the world here or there; the world of my imagination”.

Behrouz’s artworks break through the dimensions of space too. His world is not here or there but the one that his imagination constructs. Time and space therefore find their own reality in abstraction. He paints the ideas of time or space. Light in his works is not for determining the time of day but to bring us out of the ordinary dimension of time. This brings us closer to infinity which is as old as history; a history that is full of a bewildered man’s feelings and his inner world and states the passing of time and ancientness by using colors like brawn- ocher. The surface texture of the work evokes the manipulated essence of oldness.

Some of these works have architectural personalities that place the viewer in front of an ancient civilization’s remains. Sometimes concepts such as honor, courage, strength and weakness are explored in a humorous way. This humor can be subtle and lies in the concept of these artworks and the only way for understanding this humor is to engage with the work and the artist himself. This gloomy humor, despite its darkness, may give the viewer a sense of relief as well. This is a kind of puzzle, which can be solved only by referring to oneself and a redefinition of everyday concepts.

At very moment, Behrouz makes a puzzle for the viewer’s thoughts and feelings. These puzzles are not only the results of his abstract painting style – which inevitably has this characteristic – but are also derived from act of the artist’s conception. Persian poetry is written in English letters. This way of creation not only highlights and praises what is common but also becomes abstracted from the original artistic idea.Naghipour purges the form from meaning and concepts and transforms it to visual signs that can be read globally in the world of painting. Behrouz Naghipour’s artworks are as old as the human being and the extent of his world. 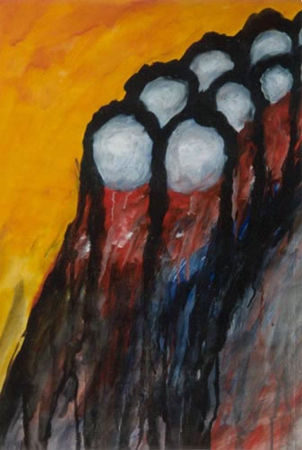 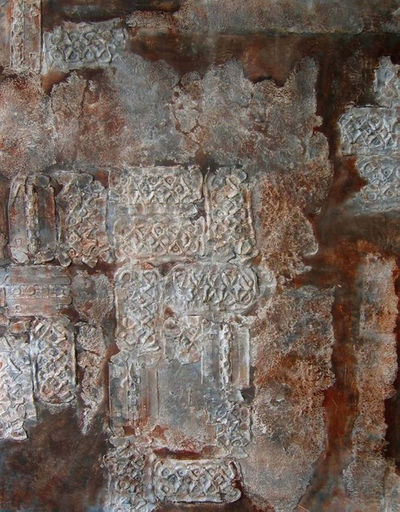